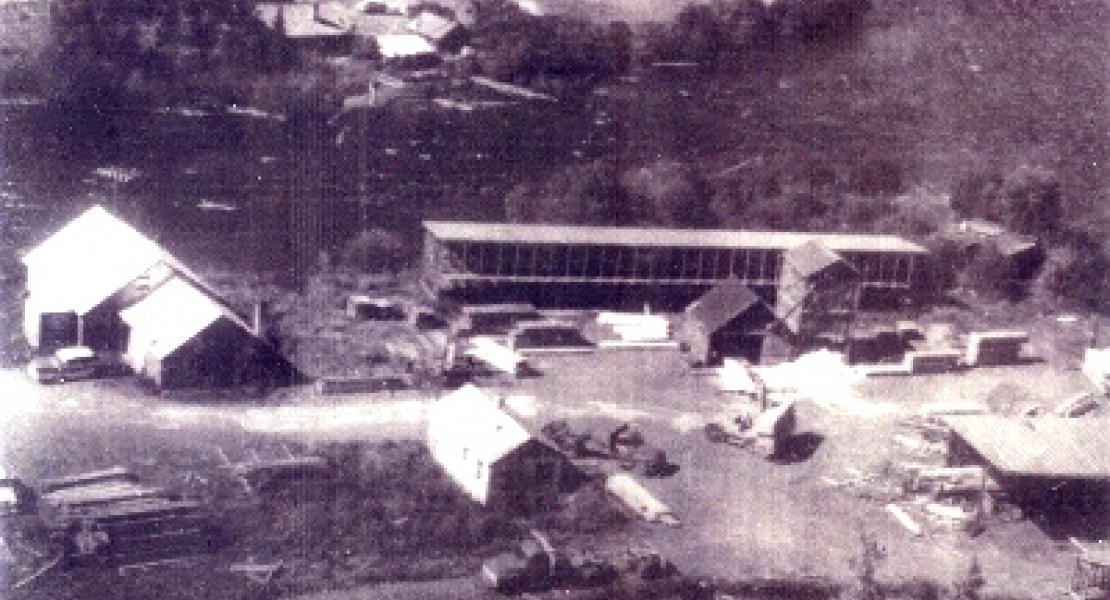 The first sawmill at the confluence of the Snake and Warm River was built by Milton M. Hammond and Joe Hendricks, early Marysville pioneers. Work began in 1894 by building a dam that diverted water from Warm River, taking it around the foot of the rocky bluff and dumping it into the Snake River.

A large concrete millpond was built alongside the new mill. This is often referred to as a swimming pool, however, nothing was ever proven that it was. A steam boiler fired with edgings from the logs powered the saw and planer. The third-year a water wheel was installed. A cable was strung across pilings in the Snake River to catch the logs floating down. A winch cable was then attached from the water wheel to the logs, dragging in the logs to the mill. At a later date, a small turbine was installed at the bottom of the millpond powering all of the equipment in the mill.

By 1906 the mill was owned and operated by Jacobs and Fogg. These were local businessmen who owned several mills including one in Island Park, and then several lumber yards that were located in St. Anthony and Rexburg. Tourists riding by on the train at that time could recount large piles of sawdust at the confluence of the two rivers.

Not too much is known about the operation of the mill in the 1920s and '30s. We do know that by 1940 Randell Howe had acquired the mill. From 1943 to 1945 Herk Rightenour was buying the mill from Howe, but because of wartime conditions, the government could not make up their mind as if a sawmill was deemed an essential industry and sometimes the mill was allowed to run and sometimes not.

Through this turmoil, Herk ran into financial trouble and Howe moved for foreclosure. Lawyers were retained and it was said that the matter ended up in the Idaho Supreme Court. Howe was repossessing trucks and equipment. Rightenour was trying to get the equipment out of Howe's grip by moving it up north to West Yellowstone. In the hurried move, Herk's brother Mertin was killed when the men were loading a planner on a freshly surplused army truck, the equipment got away from them crushing its victim. Herk ended up spending the rest of his days running a lumber and hardware store in West Yellowstone, Montana.

After World War II had ended, Randell Howe sold the mill to Chet Isaacs and his brother who had just returned from the Navy. Chet named his new business the Warm River Lumber Company, had many successful years and ran the mill until the mid-1960s. The mill was still powered with the old water turbine system for many years. Chet did convert to electricity but found the power bill to be harder to live with than the low-cost water power.

Chet and his wife Selma built a nice log home located across a low slung wooden bridge on what people called the Island. Norman Bates was an early employee and lived in a small frame home where Rightenours had resided down on the point in a swampy area where the rivers met. Logs were either trucked in, or at one time, floated down the Snake River and captured with cables strung across the river attached to man-made rock islands. The slide where the logs entered the river was upstream from Bear Gulch.

Even though the mill boasted a capacity of 20,000 board feet a day and employed 24 men, the demise slowly came as the Stud Mill in St. Anthony was established and the Forest Service started selling larger timber sales requiring a mill to upfront almost a million dollars to land a timber sale. The mill equipment was sold and disassembled in the mid-1960s.